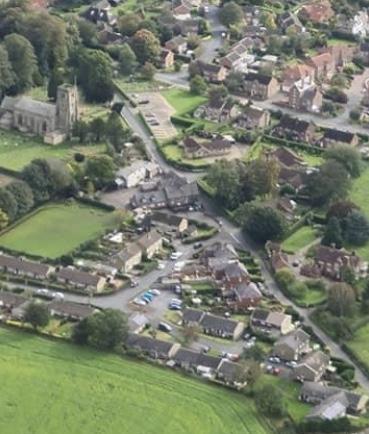 Sharow is a village and civil parish in the Harrogate district of North Yorkshire, England. It is about 1 mile (1.6 km) north-east of Ripon. The name Sharow derives from the Old English of 'Scearu' and 'Hōh' which translates as boundary hill-spur or a share/division of a sharply projecting piece of land.

The village has a Church of England primary school. The church in the village is St John's which gained Eco-Status in 2017, the fifth one in the Diocese of Leeds to be awarded such status. The church's 2-acre (0.81 ha) churchyard has been managed effectively since 1992 and now is home to a selection of rare plant life, animals and insects. The church hit the headlines in June 2011 when a group of bellringers from Oxfordshire were locked in the church's tower by an irate local due to the noise they were creating. The group were released when a passer-by was alerted to their predicament.

The remains of a sanctuary cross which signified that the traveller was within 1 mile (1.6 km) of the monastery in Ripon and therefore granted sanctuary. During the 19th century, the Archbishop of York was the lord of the manor.